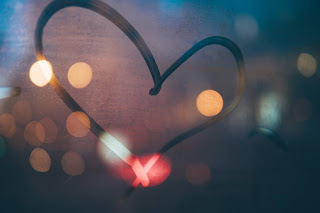 Lots of talk about #love. Have you noticed?

Awesome. Truly. Love in its intended form is an incredible, breathtaking pure thing. Yet we all know that love is often skewed to what we want it to say or mean.

So if it helps, here's a great definitive Source on this. Even if you don't know or agree with the Author, I'd encourage you to be a slow reader:

Right off the bat, we see love is not described by personal urges that must be met without question, but considerate health that examines the greater Story. Even if we may (or others may) argue, "I'm just a black-and-white kind of person, and call it like I see it no matter what," we're dared to consider that that love isn't about our feelings, but about how we cause others to feel. Granted, feelings are not meant to be anyone's god, right? We know that. Otherwise we just assume God put those there and we have no choice but to act on them.

What if the people around you didn't steal life from you, but you felt genuine compassion, empathy or joy simply by being around them, as if they intended for you to receive that from them as a gift? This is kindness, and not only is it what you're looking for from them... it's what the people around you are looking from you. It's often seen and felt in simple things. What are some of those simple things you can be kind in?

Envy is wanting what others have and being mad when they seem to take something from you. "How come the extended family is doing the reunion there instead of here?" or "Why doesn't my kid get to ______ when every other kid gets to ______?"

Do you really need to ask "What about me?" as often as you might? What if you instead became willing to become willing that others could/should be preferred before you... not so that you become a doormat, but so that you can become a party host, connecting those around you to opportunities in front of you meant to bless them, even if it didn't directly bless you?

Another way to translate this is "It does not parade..." - meaning, we don't need to seek applause for whatever we're "floating" (pardon the pun), but can live to give without flapping for clapping.

Pride means "I will do or be as I please, and if you disagree, walk away or expect to be unfriended." That smells like good self-actualization, but it is dangerously nearsighted. It removes all humility and says we are not teachable to being wrong. Love, on the other hand, says, "I sense this is who I am, but if I am wrong redirect me. My actual health comes before my perception of happiness." Isn't that why we all need doctors who will not say what we think but tell us what is and isn't actually right?

"It does not dishonor others..."

I'll be honest - I struggle with this as much as I know you do. It's hard to disagree without coming across as dishonoring. So what do we do with this? Never speak up? Not say something true in a world ready to jump on anything that isn't done "right?"

Where I've landed personally is to not making winning the argument the goal, but to create winning friendships. I have many friends who don't see life as I do, yet (from at least my end) that doesn't mean I need to slam them. Instead, I'm all in on a real-deal, life-giving, iron-sharpening-iron encouraging space where we help each other take the steps that matter. And when you/we disagree (as you/we should), you/we fight fair with high ideas versus stereotyping each other with low blows.

Our quick thought on this may be, "Be selfless." The larger value is to not live with a self-focus.

Do you see the KAPOW in that?

Imagine trying that in today's culture where we're told to be whomever we want to be without restraint or correction. Again, that smells like good advice, but what if who we want to be is misguided? Love is not about me trying to get what I want, but me living in the Largest Narrative possible, even if it runs against the grain of what I think I want or am. My ideas and urges are just a starting point to asking a better question, and not concluding I already have the answer.

Keep all of the words in this sentence in mind. There is a time when anger is appropriate, but not usually when we want it to be. We all find it easy to be provoked when someone pokes at us or our values or our loved ones... but will we let ourselves be checked on this not by the people who always agree and like our ideas, but also by those whom we disagree with?

And when we're ready to quit something, or fire someone, or make a fist... will we first seek to reengage something, get fired up for someone, and make a handshake?

"it keeps no record of wrongs."

Many misunderstand this, assuming it means we're supposed to lose our memory of hurt. Rather, the idea here is that we give someone an intentional gift every time we see them or think of them or hear of them. It goes like this, "Instead of thinking of the hurt in our past, I'm going to try to see who 'you' are 'today.' I'm going to choose to not let what happened define us, but refine us."

Look beyond the spreadsheet you've been keeping on someone. You know, just like you'd like someone to do for you.

"Love does not delight in evil but rejoices with the truth."

We can't affirm someone who takes part in something that is wrong. Otherwise, one of two things happens... (1) We begin to believe what we know is wrong somehow now isn't wrong, because that person is so, so important to us. (2) They begin to believe that what they are taking part in isn't wrong, and they never consider becoming right.

Note, though... the avoidance of rejoicing in evil isn't the only thing mentioned here. We have a huge, huge opportunity to celebrate what is actually, always right versus what is culturally perceived as currently right.

Love has confidence in the future versus insecurity in the relationship. Instead of being led by fear that the absolute worst is going to happen, it's convicted in faith that the absolute best is possible. And it does this not out of optimism, but out of action. We choose to not wrestle against each other, but against the actual darkness at work in this world that likes to disguise itself as light.

Love is permanent. Meaning, don't use that word unless you are willing to take on everything previously mentioned. And likewise, if someone tells you that they love you, don't assume it means they're locked in to marry you or that they have to tolerate your nastiness to them without practicing healthy self-care. Their declaration of love to you doesn't mean you're the definer of their love as if it came from you.

But the deepest idea here is that love outlasts any other gift. Every Christmas or birthday gift you give will one day turn to dust that suffocates, but love is the breath of life. As this passage from 1 Corinthians 13 that I've quoted reveals, love is a choice.

Which means... despite what you may have heard... love isn't love because "love is love" but because Love is *all* of these things. Otherwise, we're just using one word to define itself, which is like an eye doctor trying to accurately write his own eye prescription, and assuming he sees clearly in doing so.

Maybe that's why so many people keep bumping into each other.

Lots of talk about #love. Have you noticed?