Once upon a time, there was a man named Erick Estrada.

He may actually still be alive. If so, whomever around him is having a great time, likely on the dance floor.

Because there was a time when the guy was everywhere. We're talking guest starring on The Love Boat, popping into the Tonight Show, handing out statues at awards shows, cutting up the floor on Dance Fever, making jokes on Hollywood Squares, doing special appearances on Bob Hope specials.

(Some of you reading this may not know what any of those are. Hang with me.)

Erik Estrada was most famous for a role he played on an iconic TV show called CHIPS. He was a police officer named "Ponch" and hung out with his partner "John." They both liked wearing dark sunglasses by day and polyester shirts while out with the ladies at night. 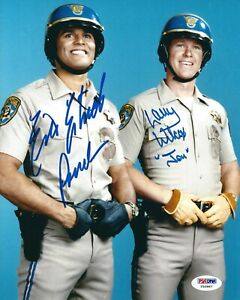 The actual actors never really got along, though. To add to the rub, an insider behind that show once shared that the producers thought Larry Wilcox would be a bigger star than Erik Estrada. They had approached him and asked what he wanted financially.  He responded, “I just want one dollar more than my co-star.”

Later when the show took off and Estrada’s smile stole the spotlight, the contract held up. Every pay increase Estrada made. Wilcox made one dollar more. Even when Estrada was given a truck as a gift from the show., Larry Wilcox also received a truck… with a dollar in the glove box.

That’s either a great anecdote for your next party, or it’s a sobering gut check on our temptation to try to constantly top someone else (or even ourselves) in our work. It may be one of the biggest challenges to occupational health.

When you’re young, success is usually about a trophy – be it a literal trophy you pursue through sports or the arts, or something figurative like a hot boyfriend or girlfriend on your arm. For some it’s what shows up in your grades or college pathway, while others gauge success via locker room lies we’ve invented to “prove your manhood” or “establish that you’re now a woman.”

Some of that changes as we get a little older, as success becomes about professional achievement or family nesting.  The “trophy” is now a nice vehicle we constantly shine as a status symbol or us finding the “perfect person” we can have the “perfect wedding” with to inspire a “perfect marriage” that creates “perfect kids” who grow up to be “perfect versions of us.”

We all need an anchor beyond our circumstances or others around us to help us focus on what matters most. In my experience, God’s voice is much more reliable to trust than what the people around you think.  I’ve been trusting in Him since I was a teenager and have learned how to pay attention to the nudges He places inside of me… which is the essence of faithfulness.

"God’s grace has been given to me. So here is what I say to every one of you. Don’t think of yourself more highly than you should. Be reasonable when you think about yourself. Keep in mind the faith God has given to each of you. Each of us has one body with many parts. And the parts do not all have the same purpose." (Romans 12:3-4)